What Are the Causes of Cracks in High Manganese Steel Castings? (Part 1)

What are the causes of cracks in high manganese steel castings? How should it be solved? OEM Metal Parts manufacturer will explain in detail for you:

1. The influence of chemical composition and organization

The chemical composition of high manganese steel at the beginning of its invention was C: 1.0% to 1.4%, Mn: 10% to 14%. At home and abroad, alloy components such as Cr, Ni, and V have been added in an attempt to increase the yield strength and hardness, and some Ti, Al, etc. have also been added to promote grain refinement. This is what we need for our track shoes, front, and rear guide wheels, and other casting materials. But no matter how the alloy composition changes, it must be controlled within a certain range to play a good role. These effects are mainly aimed at improving the performance of high manganese steel and are not obvious for crack control. Studying the influence of the various elements of the standard high manganese steel on cracks can achieve ideal results. Carbon and manganese are the main components of high manganese steel. Under normal circumstances, the structure of high manganese steel is austenite single phase. When the carbon content is low, martensite, and 8-phase (close-packed hexagonal) are easily formed. When the carbon content is high. Steels with low carbon content and high manganese content have high toughness, and the carbon content of high manganese steels should be kept as low as possible under the premise of ensuring performance. The manganese content is controlled at the upper limit. It is best to keep it in a narrow range to prevent the precipitation of carbides and to avoid the reduction of ductility and toughness and cracks. The silicon content is generally below 1.0%, which has no significant effect on the mechanical properties of manganese steel. When it exceeds 1.0% and gradually increases, strength and elongation will decrease drastically. The silicon content in production is relatively low. The sulfur content in manganese steel is relatively low because most of the manganese sulfide synthesized by sulfur and manganese enters the slag. A small amount of sulfide remains in the steel as non-metallic inclusions, which has minimal impact on the performance of the steel and can be ignored. When the phosphorus content is above 0.06%, the elongation drops sharply, which easily causes hot cracks in the casting. The phosphorus content must be controlled during production. The chemical composition and its content are inseparable from the mechanical properties. It is sometimes difficult to manufacture in the range of ingredients that meet the performance, so it should be considered for compatibility during production. This can avoid cracks due to differences in composition. 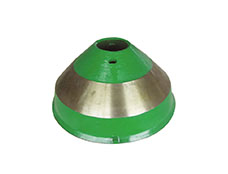 The casting process is the key to ensuring the quality of high manganese steel castings. The main consideration when preparing the process of this steel is to avoid crack formation. The main factors affecting cracks are casting structure, process parameters, pouring riser settings, core structure type, pouring temperature, etc. The structure of high manganese steel castings should be as small as possible to minimize the thickness difference of the connecting wall under the premise of ensuring the use. Avoid cracks due to shrinkage stress caused by large temperature differences. Although the wall thickness difference of some parts is reasonable, the design thickness is too large. When the cooling rate is slow, carbides will precipitate more, and cracks will also appear under the influence of shrinkage stress. When the design structure cannot be changed, the process planning must consider adding some elements that can refine the crystal grains during molten steel smelting to increase the retreat of the core. Other structural problems should depend on the situation, such as increasing rounded corners, adding transition walls, lacing, etc. The shrinkage rate of high manganese steel is higher than that of ordinary carbon steel and alloy steel. The casting blank is in a brittle state before the water toughening treatment. Any factor that affects the shrinkage will cause the casting to crack during the shrinkage stage after pouring. The more obvious is the box-type casting, which is formed by a sand core. Good concession, high-stress area is very prone to cracks.

The cast blank is in a brittle state before the water toughening treatment. Any factor that affects the shrinkage will cause the casting to crack during the shrinkage stage after pouring. The more obvious is the box-type casting, which is formed by a sand core. Good concession, high-stress area is very prone to cracks. The solution is to add sawdust, foam, etc. to the core to ensure that the sand core has proper concession. Box belts, risers, and flash burrs all hinder shrinkage. Taking appropriate measures to increase the amount of sand eaten, loosen the layer, and reduce the core gap is also an effective way to solve the concession. The position and size of the pouring riser also have an impact on the occurrence of cracks. The setting position should not affect the shrinkage of the casting. The pouring system should be distributed as evenly as possible. The flow of molten steel should be stable to reduce the temperature difference between various parts of the casting. High-manganese steel has poor thermal conductivity. If the size of the riser is too large, the excessive temperature difference between the riser and the casting in the later stage of the cooling of the casting will inevitably produce high stress, which often leads to cracks at the connection between the riser and the casting. During the process design, the riser modulus should be controlled within 1.2 to 1.3 times the casting modulus. The standard component high manganese steel has a liquidus temperature of 1400°C and a solidus temperature of 1350°C. The solidification temperature range is relatively narrow, and it is very sensitive to the pouring temperature. If the pouring temperature is too high, it is easy to cause cracks, and the temperature is low, which is easy to produce a cold barrier and insufficient pouring. The ideal pouring temperature is 1450～1470℃. Take the lower limit for thick-walled parts, and take the upper limit for thin-walled parts. When pouring, the flow will not stop after pouring.

PREVIOUS: What Are the Causes of Cracks in High Manganese Steel Castings? (Part 2)

NEXT: What Are the Characteristics of High Chromium Cast Iron Casting Production?