The modulus of Austempered Ductile iron casting. The casting modulus is greater than 2.5, it is easy to realize the riser-free casting, but some experts have doubts about this limit value. Generally speaking, relatively thick and large castings are easy to cast non-shrinkage porosity castings due to graphitization expansion. At this time, the carbon equivalent should not be greater than 4.5% to avoid graphite floating. The thin and small castings with scattered hot spots are prone to shrinkage porosity, which can be solved by cold iron, chrome ore or local internal risers. Special attention should be paid to the feeding and shrinking of the pouring and riser system. Generally speaking, use the hot riser as much as possible for the riser and avoid the use of the cold riser.

The rationality of the pouring riser process design. Use hot riser and cold iron as much as possible, the effect of cold riser is very poor.

The cooling rate of the mold.

Reasonable choice of pouring temperature and pouring speed. For some thicker castings, you can consider increasing the pouring temperature appropriately while extending the pouring speed to solve the shrinkage porosity. At the same time, it is beneficial for the secondary oxidation slag to float out of the inside of the casting and increase the qualification of flaw detection.

Under the cooling conditions of the sand mold, striving for more graphite balls is beneficial to reduce shrinkage and improve mechanical properties.

A new perspective on reducing shrinkage

Under the premise of no graphite floating and no primary graphite precipitation, increase the carbon content as much as possible. My understanding of this sentence: Generally speaking, the larger the hypereutectic, the more primary graphite will be produced in the liquid state, which is not good for reducing shrinkage.

During the solidification of ductile iron, the expansion time of graphite is controlled to delay graphitization expansion. In the case that the carbon equivalent is selected and determined, high carbon and low silicon. Appropriate residual magnesium, correct inoculation, and focus on the final inoculation.

Pay attention to the rapid smelting of molten iron, avoid excessively long storage time in the furnace at the tapping temperature, and avoid excessively high smelting temperature of 1550, which will lose a large amount of carbon and crystal cores. Generally, more than 10-20 minutes will be processed again. This molten iron will produce carbides and shrinkage even after various inoculation treatments, which are difficult to eliminate.

After the molten iron is spheroidized, it must be poured immediately. It is strictly forbidden to wait too long to cause the spheroidization to grow and decline.

Using the spheroidizing agent containing lanthanum rare earth, there will be fewer graphite crystals in the initial stage of solidification, avoiding the appearance of individual larger graphite spheres. The number of graphite spheres is relatively large and the size is relatively uniform, indicating that the precipitation time of graphite spheres during solidification is relatively consistent, and the expansion in the later stage of solidification is larger. At the recent meeting of Huazhong University of Science and Technology of Wuhan Casting Association, the use of this spheroidizing agent, Jiangyin Jixin's engineers proposed that it has no effect on the thick section of wind power ductile iron and is not applicable.

The greater the carbon equivalent of ductile iron, the wider the crystal solidification range and the larger the solid-liquid coexistence interval. During the solidification process, the flow of liquid molten iron is affected by primary dendrites, which hinder the flow and shrinkage and easily form shrinkage porosity. At the same time, the high silicon content of the molten iron is easy to promote the nucleation and growth of graphite prematurely. At this time, the graphitization expansion is in the solid-liquid coexistence period, which is not good for the reduction of shrinkage. Therefore, through some of the above-mentioned technological measures, to delay the graphitization expansion, in the actual casting technology work, it is of very important guiding significance to solve the shrinkage phenomenon of ductile iron castings. 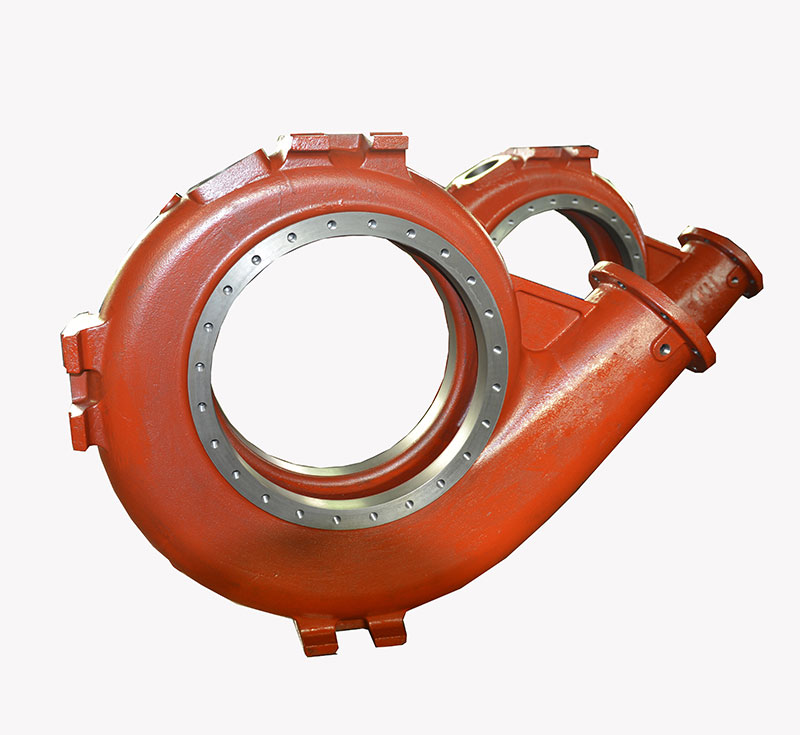 When the blast furnace hot metal is directly added to the induction furnace for short-process casting to produce Ductile iron Pump Volute, if there is no good high-temperature smelting operation in the smelting, the castings are prone to shrinkage porosity defects. Analyzing the reason, it is estimated that the thick flake graphite in the blast furnace molten iron in the original molten iron was not eliminated during the smelting process. During the solidification process, the graphite precipitated prematurely in the liquid state, and it was caused by insufficient graphitization expansion in the later solidification stage.

PREVIOUS: What Are the Differences Between Metal Castings and Forgings?

NEXT: What Are the Causes of Cracks in High Manganese Steel Castings? (Part 2)