Can Ductile Iron Be Welded?

Can Ductile Iron Be Welded?

A cast iron is an alloy of iron, carbon, and silicon, which usually contains more than 1.7 percent carbon and less than 4.5 percent carbon.

Cast iron has low overall weldability and depends on the requirements for material type, complexity, thickness, casting complexity, and machinability.

Ductile irons and malleable irons have good weldability while gray cast iron and white cast iron are only used for small accessories.

The most widely used type of cast iron is called gray cast iron. Gray cast iron has a variety of components, but as is often the case, it is primarily perlite, with many graphite flakes scattered throughout.

There is also alloyed cast iron, which contains small amounts of chromium, nickel, molybdenum, copper, or other elements added to provide specific properties. 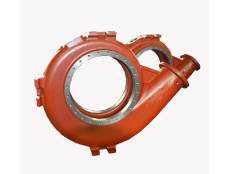 In white cast iron, almost all carbon is binding. This provides cast iron with higher hardness for wear resistance.

Malleable cast iron is made by special annealing of white cast iron to change the structure of the carbon in the cast iron. The structure changes to perlite or ferrite, thus increasing its ductility.

Nodular iron and ductile iron are made by adding magnesium or aluminum, which will bind the carbon, or make the free carbon spherical or spherical, rather than the common sheet in gray cast iron. This structure provides a greater degree of ductility or ductility of the casting.

The main factor causing the welding difficulty of cast iron is its lack of ductility. If the load on cast iron exceeds its yield point, it will break without deformation and will not deform to any degree. Therefore, welding filler metal and part configuration should be selected to minimize welding stress.

Ductile iron can be welded successfully to produce the alkaline-iron weld which has considerable mechanical properties. As with any base material, the success of ductile iron welding depends on proper equipment, correct procedures, qualified welders, and effective quality control procedures.

Ductile iron has become increasingly important commercially because, in many ways, ductile iron has the qualities required of cast iron and steel, and is stronger and more malleable than ordinary cast iron. However, a number of defects have occurred in the welding of this type of cast iron, as it has been found difficult to match the properties of the welding deposits with those of the base material, particularly in terms of color and expansion properties. In some cases, it is also difficult to produce weld deposits for this type of cast iron, which is reasonably free of pores and unwanted residues.

In addition, as with most grades of cast iron, the properties of ductile iron are shown as follows: good hardness, good wear resistance, and good corrosion resistance. There are different levels of tensile strength and yield strength. It has a widely used compressive strength (specific tensile strength), often of a value approximately twice the tensile strength. Impact strength is superior to grey cast iron and the lower grades are close to the common values of low carbon steel. The resistivity is much lower than that of gray iron. Corrosion resistance is similar to gray iron. Machinability depends on hardness, ferrite stainless steel is better machinability.

NEXT: What Is Ductile Iron?