What Is Ductile Iron

What Is Ductile Iron

Cast iron is an alloy of iron, carbon, and silicon, with a carbon content of approximately 3.2% and a silicon content of approximately 2.2%. If the molten cast iron is allowed to cool normally, the carbon will form graphite flakes, which pass through the iron matrix, so it is called flake graphite iron. These flakes are at the microscopic level, and their ends form stress points in the cast iron.

If cast iron is subjected to compressive loads, these stress points are not particularly harmful, and flake graphite cast iron is excellent under compression. However, when the tensile load exceeds the natural tensile strength of cast iron, cracks propagate rapidly from these stress points, which can cause rapid tensile failure. The result is that cast iron has almost no elongation and is a brittle material, so its use in tensile and impact load applications is limited. For many years, foundry workers and metallurgists have tried to develop a new type of cast iron that can withstand bending and impact loads, but also has more malleable cast iron characteristics, and can produce gray cast iron at a lower cost. This led to the development of ductile iron.

The history of ductile iron

In 1943, in the research laboratory of the International Nickel Corporation, Keith Dwight Millis added magnesium (a copper-magnesium alloy) to cast iron-the solidified cast iron did not contain scales, but It is almost perfect spherical graphite. Ductile cast iron was born. The advantage of ductile cast iron is that graphite balls are not used as stress concentrators, but as crack arresters, which is the reason for the ductility of ductile cast iron.

This new form of cast iron was immediately used for malleable cast iron, forgings, cast steel, or steel products. From now on, ductile cast iron has developed into a world-class material. Compared with traditional alternative materials, it provides casting solutions at a competitive price.

Ductile cast iron can be alloyed with a small amount of copper. As the copper content increases, the strength of the iron will become higher and higher. These copper alloy ductile cast irons can also be heat treated and are particularly suitable for induction and flame hardening. By adding up to 30% nickel and a small amount of chromium, a series of austenitic ductile irons can be produced. These austenitic ductile irons have better performance in high temperatures and harsh environments. 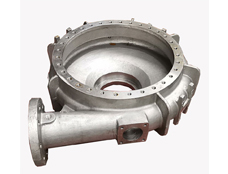 PREVIOUS: Why Is Ductile Iron Important?