Why Is Ductile Iron Important?

Why Is Ductile Iron Important?

In 1943, Keith Millis, Albert Ganebin, and Norman Piling received a U.S. patent for their use of magnesium to strengthen ductile iron. Due to the many useful properties of this kind of iron, the use of this kind of iron became more and more popular as a material for many commercial applications in the 1950s and 1960s.

Although ductile iron is a type of cast iron, it is more resistant to fatigue and wear than cast iron due to the round graphite structure cast into the metal. These spherical graphite drill bits enable ductile iron to withstand greater impact, while also allowing the extension. Ductile cast iron is usually called spheroidal graphite cast iron or nodular cast iron.

Ordinary cast iron, also known as gray cast iron, also contains a small amount of graphite, but they exhibit curved lines and are called flakes, contrary to the graphite balls you see in ductile iron. Of course, the only way to see graphite is with a microscope, not the naked eye.

The main component of ductile iron is a combination of iron (about 94%) and carbon, silicon, manganese, magnesium, phosphorus, sulfur, and copper. Sometimes more copper is added to increase strength, while nickel or chromium is added to increase corrosion resistance. In this case, 15-30% of the iron element will be replaced with other elements.

When making ductile iron, foundries will of course continue to add carbon from the iron itself until they add more carbon than iron can normally absorb. This is the difference between spheroidal graphite cast iron and steel because the carbon content in the steel compound is only the content that iron can absorb.

If you drop an object made of (gray) cast iron from a height of 10 feet above the ground, it is very likely that you will see the cast iron object crack. But this is not the case for things made of ductile iron. Objects made of ductile iron can be hit continuously without cracking. This is a very important thing when deciding what material will fit the application, you need it.

The graphite flakes in gray cast iron are more likely to cause a fracture, while the spherical nodules in nodular cast iron actually help the iron together. Gray iron is more brittle and more prone to cracking, while ductile iron will bend.

Ductile iron has stronger wear resistance, so it has a long-lasting power. Therefore, it is very suitable for applications that require more resistance due to friction. In these cases, the graphite structure can act as a dry lubricant.

This type of iron has good heat dissipation capacity. Generally speaking, it is not difficult to machine, but it is more difficult to machine than ordinary gray cast iron. This is a great match for use on large machines because it tends to suppress sound and vibration better than using steel.

One of the best uses for iron using ductile is for applications where you need a stronger, more wear-resistant metal. 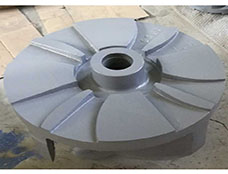 NEXT: What Is Ductile Iron