Impeller Knowledge, How Much Do You Know?

The concept of impeller: OEM impeller not only refers to the wheel disk with moving blades, which is a component of the impulse steam turbine rotor but also refers to the general term of the wheel disk and the rotating blades installed on it. Impellers are usually cast or welded, and the material is selected according to the working medium.

The closed impeller is composed of front and rear cover plates and blades;

The semi-open impeller is composed of blades and rear cover;

The open impeller only has blades and part of the rear cover or no rear cover.

The semi-open and open impellers of the vane impeller are easy to cast and can transport media containing certain solid particles. However, because the solid particles abrade the flow channel, the working efficiency of the pump will be reduced.

The closed impeller has high operating efficiency and can run smoothly for a long time. The axial thrust of the pump is small, but the closed impeller is not easy to transport sewage media containing large particles or long fibers. 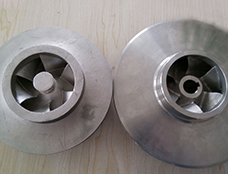 Single suction impeller means that the impeller sucks liquid from one side.

The double-suction impeller means that the impeller sucks liquid from both sides and has the excellent anti-cavitation performance.

The semi-open and open impellers in the blade impeller are convenient for casting and easy to maintain and clean up the impurities that are blocked during transportation. But its disadvantage is that the gap between the inner wall of the pressurized water chamber and the blades are enlarged during the abrasion of the solid particles during transportation, which reduces the operating efficiency of the pump, and the increase in the gap makes the stability of the liquid flow in the flow channel damaged. , Make the pump vibrate, this type of impeller is not easy to transport the medium containing large particles and long fibers. The closed impeller has high operating efficiency and can run smoothly for a long time. The axial thrust of the pump is small, but the closed impeller is easy to be entangled, and it is not easy to transport sewage media containing large particles or long fibers.

The spiral centrifugal impeller has twisted blades and extends axially from the suction port on the conical hub body. The conveyed liquid will not hit any part of the pump when it flows through the blades, so there is no damage to the pump, and it is not destructive to the conveyed liquid. Due to the propulsion of the screw, the suspended particles can pass through, so this type is adopted. The impeller pump is suitable for pumping media containing large particles and long fibers.

The swirling impeller is that all or part of the impeller is retracted to the flow channel of the pressurized water chamber, which has the good anti-blocking performance. The particles flow in the water pressure chamber and are driven by the vortex generated by the rotation of the impeller. The movement of the suspended particles itself does not generate energy and the flow channel exchanges energy with the liquid. In the flow process, suspended particles or long fibers do not contact the worn blades, and the blades are more abraded. There is no increase in the gap due to abrasion. It is suitable for pumping media containing large particles and long fibers.

Common problems and treatment methods of the impeller

1. Defects of the cast iron impeller

2. Treatment method: Grinding, repair welding, and other methods can be carried out according to the actual situation. If the problem is serious, it needs to be scrapped and recast.

1. Failure performance: The picture shows the process pump impeller made of gray cast iron material being worn by water containing a small amount of cement foam within 5 years. The abrasion problem is more caused by the improper material selection of the design party or improper pump type selection, Or the process medium is contaminated.

2. Treatment method: lower the installation position; change the material that is more resistant to cavitation; redesign the pump type, etc.