Differences Between Impeller And Propeller

Differences Between Impeller And Propeller

They may sound similar, but their purpose and function are quite different. For example, both are used to operate a boat, but they are completely opposite in function. A propeller is a fan that converts rotational force into linear motion by pushing fluid. The impeller is a kind of rotor, which is usually part of the pump, which produces suction, that is, sucks liquid into the vehicle or engine.

Simply put, the impeller is a rotor that generates internal suction as part of the pump device. As far as the ship is concerned, the impeller consists of a series of flexible rubber blades attached to the central hub. This hub rotates around the shaft in the stainless steel liner in the pump. The cold water is pumped by the impeller into the ship’s engine to cool it under load. Marine engines have an impeller in the water pump, which is used to introduce water from outside the ship into the piping system.

There is an inlet on the impeller to allow water to flow inside the ship, and rubber blades push the fluid through the inlet. The impeller is the rotating part of the centrifugal pump, which pushes the fluid away from the center of rotation. Therefore, energy is transferred from the pump to the water, creating velocity in the water, causing it to move outward from the pressurizing pump.

The propeller is a fan that pushes fluid away from it, transforming rotational motion into linear motion. Similarly, in the boat example, the propeller works like a fan, generating thrust, thereby generating power to move the boat.

What are the main similarities between impellers and propellers?

Propellers and propellers have many similarities:

They all rely on external motors to provide power

Both require continuous maintenance to keep them running at peak performance

Whether it is propulsion or pressure, impellers and propellers use water to generate energy

What is the main difference between impeller and propeller?

The main difference between the two is their purpose and function. Impellers are usually the main components of the cooling system. When the engine is running, they must suck water into the engine to keep it cool and at a proper temperature. Propellers are the main component of a vehicle's propulsion system; they produce movement in vehicles such as ships and airplanes. The faster the propeller blades turn, the greater the speed and acceleration generated. 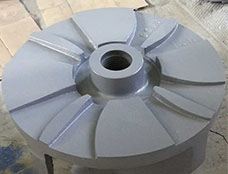 The impeller is contained in the pump housing, the propeller is not

When impellers and propellers were first created and used, they were fundamentally different in many ways. Now, with the passage of time and technological advancement, they all use the design of wing technology, which is derived from Bernoulli's principle. Therefore, the principles of their use are now more similar than ever before.

PREVIOUS: What Is The Role Of The Impeller?

NEXT: Should You Consider Stainless Steel Impellers?